Safeguarding the Heritage of Battersea

The iconic Grade II listed building and surrounding area brought back to life as one of the most exciting and innovative mixed use neighbourhoods in the world superbly waterproofed by leading waterproofing specialist Briggs Amasco.

The diligence and expertise displayed by the UK’s leading national commercial roofing company, BriggsAmasco, has earned the company an IKO Contractor Recognition Award.

The contest, which is open to contractors nationwide, recognises ‘astonishing’ projects and excellent workmanship. BriggsAmasco’s award was due to roof waterproofing work carried out at Brighton College, and a voluntary programme it completed at Frimley Park Hospital, Surrey. As well as winning a trophy, the company is now in the running for IKO’s Contractor of the Year Award.

Dave Maginnis, Managing Director at BriggsAmasco, said: “This is magnificent news. The award is testament to our brilliant onsite engineers and the talents of everyone who makes a day-to-day contribution to the company’s success. We are one very proud team.”

IKO judges praised BriggsAmasco for the ‘excellent’ quality of its work at Brighton College. The project, designed by award-winning Dutch architect, OMA, involved the supply and installation of waterproofing and finishes to a new sports and science facility. The £38m state-of-the-art centre will provide a world-class training environment, making a transformational difference to school life for generations to come.

BriggsAmasco was also commended for its voluntary work, as well as its ‘approach to training, safety and sustainability’ at Frimley Park Hospital. Working in conjunction with other trades, the community project saw Briggs’ staff toiling during their free time to help transform the hospital’s gardens. Overall, judges proclaimed BriggsAmasco’s award entry as ‘high-quality’ and ‘compelling’.

The inaugural IKO Contractor Awards, during which the overall winner will be announced, is due to take place in London next year.

Dave Maginnis added: “I’d like to say a personal ‘thank you’ to our staff, all of whom have contributed to this fantastic achievement. Praise also for IKO. The awards are a brilliant initiative and do much to publicise the wonderful work carried out by roofing contractors throughout the UK.”

The function means issues relating to health and safety or potential impediments to a project’s progress can be recorded and addressed far more rapidly.

The mobile app, which was developed in conjunction with a leading software company, is accessed via tablets which have been distributed to all BriggsAmasco on-site staff.

Dave Maginnis, Managing Director at BriggsAmasco, said: “The app has proved itself an incredibly useful tool. Compared to written reports, which can take two or three days to complete following a site visit, this new process is instantaneous. As long as there’s a WI-FI signal, reports can be digitally signed-off and sent without delay. These can then be circulated internally, or externally to customers.”

Dave said the ability to include photographs as part of the digital reporting package will help speed-up response times to on-site issues and offset potential project delays.

“Featuring pictures as part of a progress report enables potentially problematic situations to be easily referenced off site,” he said. “These can then be addressed quickly and effectively. Additionally, photos can clearly highlight how well a particular detail is progressing, thus providing real clarity for a contractor or client about a project’s current position.”

The on-site reporting app’s evolution will soon enable videos to be uploaded and distributed amongst interested parties. Dave said such innovation will lead to smarter working practices.

“With the addition of video capability, we’re thinking as more companies take on board the app idea; it will be seen as a far more convenient way to carry-out reports. This could lead to a reduction in site visits by other interested parties involved in a project, as all the information they need regarding its progress will be available at the touch of a button. This will help promote a more productive way of working, as well as enhance a project’s sustainable credentials.”

“The app keeps BriggsAmasco ahead of the competition,” Dave continued.

“It’s been particularly well received by contractors we’ve been involved with on projects. For instance, a main contractor on one scheme we were working on called a meeting with the other trades and told them our digital reports were the type of information they wanted to see. ‘Please use this as your template’, they told them. It was a fantastic compliment, and precisely the sort of response we anticipated when we began researching the app’s capability more than two years ago.”

BriggsAmasco was responsible for the installation of waterproofing and finishes to roof areas at a new sports and science facility at Brighton College. We’re thrilled to have been shortlisted in the Bituminous Hot Applied Liquid Waterproofing category at the NFRC Roofing Awards for the project. The workmanship was underpinned throughout by a superb collaborative working relationship between BriggsAmasco, OMA, IKO and McLaren Construction Group. We’re looking forward to celebrating at the awards ceremony on 2nd October at the InterContinental London with everyone involved!

Janice Tyler, PIEMA, is the Environment & Supply Manager at BriggsAmasco. When she was asked if she would like to speak about sustainability at the 2020 RCI show she was delighted to accept. Her talk will be on the necessity of culture change within our businesses if we are to tackle climate change and other sustainability issues successfully.

Janice has worked for BriggsAmasco for over 25 years, in the Commercial Department. She took on the sustainability role in 2013 which has grown naturally in diversity and importance. Having worked in other industries prior to construction, including publishing and international FMCG and finance, she has a wide range of knowledge and experiences that contribute towards encouraging a culture of change in a pragmatic way, ensuring that the three pillars sustainability – planet, people, and profit – are embedded.

If you would like to understand more about how change can be encouraged and achieved, then Janice’s talk is on Wednesday 25th March at 11.30. Register now at www.rcishow.co.uk

Our Glasgow branch was a finalist at the NFRC Scottish Roofing Contractor of the Year Awards, held at the Grand Central Hotel on 15 November.

They were shortlisted for their work at Prince & Princes of Wales Hospice, Glasgow in the category Reinforced Bituminous Membrane, but were runners up on the night. 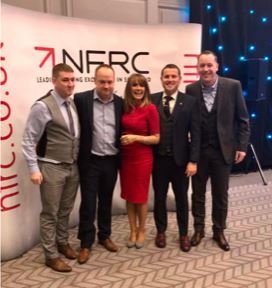 Further details can be found on the NFRC website.