The UK’s leading waterproofing roof specialists, BriggsAmasco, is celebrating, having been named ‘Contractor of the Year’ at this year’s Mastic Asphalt Council (MAC) awards.

The accolade was presented in recognition of the company’s use of mastic asphalt at the new Westfield Shopping Centre development in Stratford. BriggsAmasco has been involved in a range of waterproofing schemes across the site including flagship John Lewis and Marks and Spencer stores, where 10,000 square metres of mastic asphalt has been installed. The 1.9 million sq ft Westfield Stratford City will be the largest urban shopping centre in Europe and will support the continued regeneration and ongoing development of the area.’

The annual MAC awards were held at the Royal Horseguards hotel in London where manufacturers, contractors and suppliers gathered to celebrate industry achievements across the year. The Contractor of the Year award is considered the highlight of the evening and Frank Lynch, Operations Director of BriggsAmasco (left in photo), accepted the award from MAC Chairman David Maginnis (right in photo).

Frank Lynch commented on the company’s award win: “This is a real honour for us and has definitely been a highlight in our 2010 calendar to date.

“BriggsAmasco is a long established and well recognised roofing contractor that carries out work on many landmark buildings and developments across the UK. Our experience working with mastic asphalt is second to none and we are delighted to see our work being recognised at a large scale scheme such as Westfield Stratford by an important trade organisation such as MAC.” 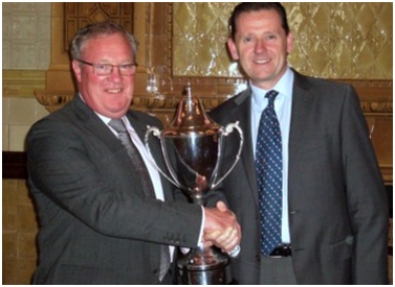