BriggsAmasco, the UK’s leading national commercial roofing company, supplied the roof – from design to installation – for the gym based in Weybridge, Surrey. The company had previously installed a FlexiPhalte car park deck roof and carried out repairs on an office block at the site, hence it was chosen for the gym’s latest refurbishment in December 2016 – one of the busiest periods for the leisure industry with members getting in shape for the festive season. It was vital therefore the gym remained in operation whilst the new roof was installed. Staff and customer safety was paramount during this time, with BriggsAmasco erecting scaffolding around the site’s perimeter to protect those entering and exiting the building.

Tony Sutton, Contracts Manager at BriggsAmasco, said of the project: “It’s testament to the supreme skills of our onsite teams that they were able to complete the installation during the busy festive period without interruption to business. The inclement weather provided a further challenge, but the high levels of safety applied meant potential hazards were eliminated. As a result of the hard work which went into these projects for JTI UK, we have formed a very good working relationship with them and look forward to collaborating with them again in the future.”

Despite the ever-present threat of weather interruption, BriggsAmasco’s experience in delivering a range of roofing systems meant the gym was supplied with a smart, watertight roof in time for the new year, when membership levels at leisure centres nationwide traditionally increase as people look to burn-off the festive excess. 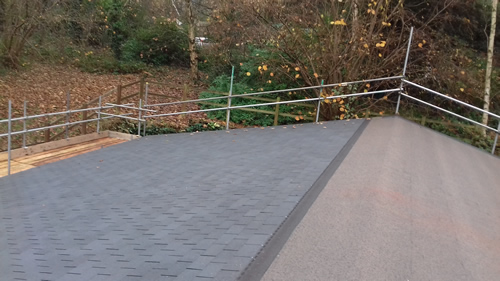